Kawasaki Heavy Industries launched the world’s first liquefied hydrogen carrier, the Suiso Frontier, a step in “tapping the carbon-free energy potential of the lightest element,” reports Dan Murtaugh for Bloomberg. “Hydrogen can be produced using water and electricity, and then stored and shipped and re-used to generate power, allowing countries with little space for wind and solar equipment to still receive carbon-free power.” A press release from Kawasaki explains, “This vessel was developed to provide a means of transporting liquefied hydrogen at 1/800 of its original gas-state volume, cooled to –253°C, safely and in large quantities over long distances by sea. Kawasaki plans to install a 1,250 m3 vacuum-insulated, double-shell-structure liquefied hydrogen storage tank, currently being manufactured at Harima Works, on the ship and complete the vessel's construction by late 2020.” The plan is for the vessel to transport fuel made in Australia to Japan. Hydrogen is volatile with costly and energy-intensive production that still requires fossil fuels. Researchers continue to develop and refine renewable energies, and Australian researchers have reported they use metals like iron as catalysts to speed the process, thus reducing energy costs. Kawasaki also works toward establishing a Hydrogen Society. – YaleGlobal 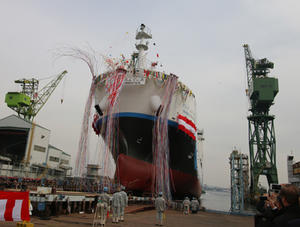 Read the article from Bloomberg about the launch of the world’s first carrier powered by liquefied hydrogen.

Read an article from Phys.org about how researchers with the University of New South Wales have found a less expensive way to split water and make hydrogen.

Read more about hydrogen from the US Office of Energy Efficiency and Renewable Energy.