The World’s Poor and Sick Have Not Been Forgotten

If you're sick, it's definitely better to live in a rich country than a poor one. Pharmaceuticals produced in developed countries are prohibitively expensive for people in the world's poorest areas, but there are signs of improvement, says legal scholar Krishna Ravi Srinivas. In August 2003 trade ministers concluded negotiations on an agreement that will allow companies to profit on their research and development investments but also allow developing countries to produce or purchase generic drug versions at much lower prices. Improved drug access could also result from emulation of the computer software industry's open source development model, or the establishment of a new global fund to compensate patent holders for lost revenue. Although access to life-saving drugs is not yet universal, the world's poor do have reasons to be optimistic. With a little creativity and a lot of commitment from governments and companies, Srinivas concludes, millions of people can be assured of receiving the medications they need. – YaleGlobal

The World's Poor and Sick Have Not Been Forgotten 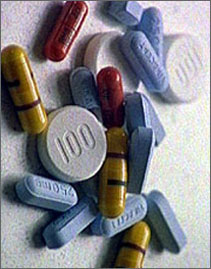 It costs millions to develop new drugs, but most trials don't result in usable medicines.

BLOOMINGTON, USA: When millions of people are in need of medicines for diseases like AIDS, malaria and tuberculosis, should intellectual property rights be a reason to deny them the access? In November 2001 at Doha, trade ministers recognized the rights of afflicted countries to take measures for protecting public health and ensuring access to medicines. They held that interpretation and implementation of TRIPS (Trade Related Intellectual Property Rights) should not become an impediment to receiving treatment and acknowledged that compulsory licenses to produce drugs were useless to countries that lack a domestic manufacturing capacity. The trade ministers agreed to arrive at a solution to this problem by December 2002. In August 2003, this goal was achieved, though not without great debate.

Investing in drug development and testing and meeting regulatory requirements cost pharmaceutical companies in developed countries millions of dollars every year. And, most of the drugs researched turn out to be dead-ends that will never be marketable. The companies that invest in drug testing and development thus need intellectual property protection so that they can be assured of a decent return on the few drugs that work. Sales from these effective drugs are necessary to cover not only the cost of those few successes, but also all the dead-ends that will never payoff.

The TRIPS Agreement protects the rights of patent holders in many ways and places many restrictions on issuing compulsory licenses. A compulsory license enables the government to override patents and use the technology to produce cheaper versions of drugs by other manufacturers. The solution agreed to in August 2003 makes it easy for countries without manufacturing capacity to import drugs from countries like India and Brazil which have many generic manufacturers that supply drugs at a fraction of the price asked by their developed world counterparts. An Indian manufacturer, for example, offers medicines for AIDS for $300 whereas an American producer offers the same drugs for $10,000. 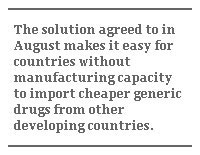 Canada, a country with a huge capacity for generic production, has decided to amend its laws so that the generic manufacturers can receive compulsory licenses to produce and supply drugs to developing countries. This action shows that at least one developed country is willing to take steps to increase the supply of medicines, particularly the antiretroviral drugs so essential to the successful treatment of AIDS. Moreover, Canada may serve as an example for other countries and encourage them to apply for compulsory licenses.

Together, Canada, Brazil, India, and China could successfully supply the high demand for drugs in African countries while immensely impacting the global drug market. In a vigorous campaign, Brazil managed to use the stipulations of TRIPS to negotiate substantial price reductions for brand name pharmaceuticals imported from the developed world. These price reductions not only made Brazil's domestic anti-AIDS campaign feasible but were integral to Brazil's unprecedented success in battling HIV in its major cities with a combination of public health policies and free provision of drugs.

In another significant development, some experts have argued that universities could help save lives in developing countries by working together to promote access-friendly intellectual property policies. They have pointed out that research universities like those in the United States generally patent their inventions in developing countries and hence can frame policies that ensure that drugs are available at affordable prices and in adequate quantities. Their policies can stimulate competition in generics and thereby improve access to drugs.

Yale and Bristol-Myers Squibb worked together for a patent concession and achieved a huge price reduction for a patented drug in South Africa. There are a plethora of other opportunities for the pharmaceutical industry and universities to work together for the greater common good. And, since the markets in developing countries are very small and provide little revenue, such concessions will have only miniscule effects on the bottom lines of companies and universities.

Universities in developed countries could also cooperate with developing world companies to create good research and development centers. If developing countries have the capacity and facilities to develop their own drugs, a truly win-win situation could be achieved.

Patents are necessary for the companies, but there are many other ways to promote innovation. Open source models promoted in the computer software industry are being increasingly used to share human genome data. These models may have great potential for use in drug development and research. Another possibility is that companies that are willing to relax conditions on the use of their patents could be compensated from a global fund that acquires the patent to use them in some specific markets only. Drug research and development that is done in the public sector and tax incentives could be offered to encourage pharmaceutical companies to share their knowledge or license their technologies free of charge.

The Commission on Intellectual Property Rights and Development has made some significant suggestions regarding TRIPS and access to drugs, many of which couple some of the possibilities mentioned above. The TRIPS Agreement also provides flexibilities that will be greatly helpful to developing countries, particularly when combined with public health policies. For example, least developed countries need not comply with TRIPS until 2016. Thereafter, compulsory licensing will allow them to import medicines from developing nations like India or Brazil.

It is estimated that in Africa, 30 million people are HIV positive. And, of the 4 million people suffering from AIDS, hardly 2 percent have access to treatment. In a country like Botswana, where about 38 percent of the adult population has AIDS or HIV, effective treatment is integral to the present and the future of the country.

As it stands, many countries lack adequate health care and delivery systems, making investment in health infrastructure a vital supplement to drug access. The Global Fund to Fight AIDS, Tuberculosis and Malaria (GATM) was launched in 2001 to direct funds to projects that would tackle this issue, but it currently lacks adequate funding. These financial concerns hinder the organization's ability to initiate many projects, though it has assembled much information about past experiences in tackling AIDS. These financial constraints may ultimately prove an even greater obstacle to fighting AIDS than the shortage of cheap medications ever was.

If innovative measures are discussed and adopted, intellectual property protection need not be a stumbling block to ensuring access to medicines to combat global epidemics like HIV-AIDS. But drugs alone will do little good, no matter how cheap, if there are no people or facilities to distribute them and monitor the patients. Greater commitment to financing and developing health care infrastructure is needed if millions of lives are to be saved. Will the global community rise to the occasion and meet the challenge?

Krishna Ravi Srinivas is a Visiting Scholar at School of Law, Indiana University, Bloomington, email: krsriniv@indiana.edu. This article is written in the personal capacity of the author and need not necessarily reflect the views of any institution or organization.