Wrecking the WTO: Times of India

US President Donald Trump seeks partners in his push to rebalance global trade, reduce global agreements with environmental and other constraints, and build US influence based on power rather than cooperative alliances. He views the UK’s Boris Johnson as a likeminded leader, after an overwhelming victory in parliamentary elections all but ensures Britain’s speedy exit from the European Union. Trump regards Brexit and the slow crippling of the World Trade Organization – after the US blocked appointment of judges to the Appellate Body that settles disputes – as victories. These combined with a strong economy, albeit one constructed on massive debt of all types, strengthen Trump's chances for reelection in November 2020. In his column for the Times of India, Nayan Chanda points to the irony of current leaders who resist trade: “It was joint US-British leadership that built from the ruins of World War II to lay the foundation of the Bretton Woods system – the IMF, World Bank and GATT – the economic structure of the postwar world.” WTO members could overturn the US vetoes, but that might push the world’s largest economy to abandon the organization altogether. Chanda questions how long global order and economic stability can withstand the “my way or the highway” approach from major powers. – YaleGlobal

Wrecking the WTO: Times of India

Boris Johnson’s big win on Brexit boosts Donald Trump’s agenda and preference for one-on-one trade deals over expansive agreements like those of the EU and WTO
Nayan Chanda
Wednesday, December 18, 2019

Read the article from the Times of India about the impact of Brexit and blocked appointments to the Appellate Body of the WTO.

Nayan Chanda is a US-based journalist who writes columns for the Times of India and the founding editor of YaleGlobal Online. 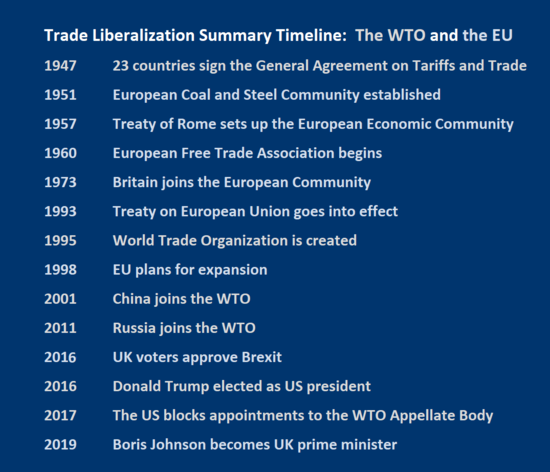 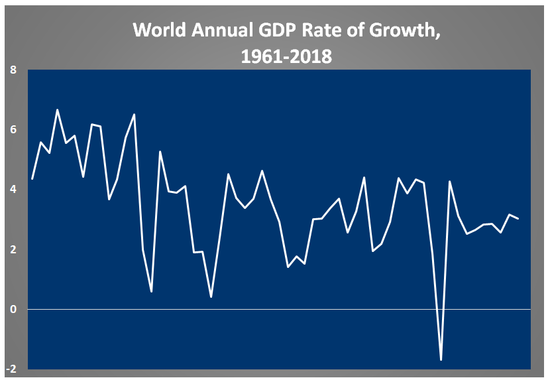 Chaos and US Standing: Times of India

European Populism Out of Steam? Times of India

The original members of the GATT were at approximately the same level of economic development, what we today would call "First World". While there were various trade distortions caused by the role of the dollar in Bretton Woods, the system worked reasonably well.

The seeds of the current backlash were planted in the 1970s, when major free trade agreements were signed between the United States and various Third World countries. To be quite blunt, these deals involved trading American Jobs for political favors. By the time that the GATT had morphed into the WTO, the United States had a permanent, structural Trade Deficit.

People in the IMF, World Bank, WTO, and International Development Community are proud of the fact that they have lifted a Billion people out of poverty since the end of the Cold War. They talk about this achievement frequently. They are less willing to talk about the fact that the WTO, NAFTA, and the Global Agreements on Capital Movement have plunged tens of millions of US Citizens into poverty. These are the people who support Trump. These are the people who hate Globalization.

I do not expect those who support the WTO to change their view. I just wish that they would stop calling anybody who does not agree with them a Racist. The formerly Middle-Class People who live in Ohio, Michigan, and Missouri have legitimate grievances.