Last September's WTO ministerial meeting in Cancun failed to produce a substantive trade agreement after a group of developing countries banded together to demand the EU and the US discontinue their multi-billion dollar subsidy programs. When the EU and US resisted, the talks fell apart. But the latest ruling by the WTO against US cotton subsidies may help push through the Cancun bottleneck, say Africa specialists Gayle E. Smith and Susan E. Rice. The trade body's preliminary ruling agreed with a Brazilian complaint that American cotton subsidies constitute unfair export subsidies. For Brazil, but especially for Africa, the authors say, the ruling is momentous. Not only does it hold out the promise of more realistic cotton prices on the world market - a potential boon to poor African farmers - but it also represents a step forward for African countries and other developing nations who have struggled for years to make 'free trade' work for them as well as for the richer industrialized world. "While the terms of trade still favor the world's wealthier nations," Smith and Rice argue, "this victory signals that the WTO's most powerful members will have to keep listening to Africa's small farmers." - YaleGlobal 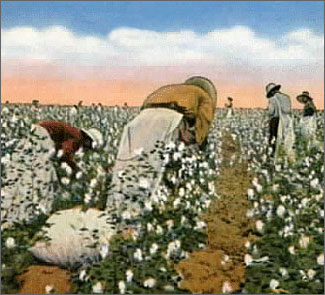 Although cotton is no longer "white gold", the WTO ruling could restore it as a viable cash crop in Africa

WASHINGTON: Africa has secured few victories in the race to gain advantage in the global economy. But a preliminary WTO ruling against US cotton subsidies could signal a shift in the continent's fortunes.

The April 27 ruling by a panel of trade judges found in favor of a petition, filed by Brazil, arguing that annual government payments of between $2 and $3 billion to America's cotton farmers constituted a violation of WTO rules governing international trade. The final ruling will not come down until June, and if the panel's determination is upheld, the United States is expected to appeal.

If it stands, the WTO's finding would represent both political victory and financial gain for Africa's small farmers. Africa's cotton production is concentrated primarily on small farms in the western and central regions of the continent including Mali, Benin and Burkina Faso. Africa's ten million cotton producers earn on average $400 per year, and lose an estimated $250 million annually to heavily-subsidized cotton producers from the world's wealthier nations, in large part because subsidies enable American producers to offer their cotton at much lower prices and still record profits.

Although the European Union also provides massive subsidies to its agricultural producers, the United States has for years led the world in cotton subsidies. The US Farm Bill passed in 2002 provides for $190 billion in assistance to the American agricultural sector over the next decade. While this funding includes some highly-beneficial programs in, for example, farm conservation, community food projects, and innovative rural development, the lion's share of federal funding is allocated for subsidies to eight crops. Only farmers with adjusted gross incomes of more than $2.5 million are considered ineligible. US policy, therefore, does not foster free and fair competition between small farmers in Africa and America - it pits Africa's small farmers against huge US farms, many of which are owned and managed by corporations.

For Africa's small farmers, the long path to victory in the WTO began with cotton producers' associations across West Africa. A relatively new crop introduced after independence in the 1960s, cotton was at one time a viable cash crop that yielded enough profits for farmers to give it the nickname “white gold.” But international cotton prices began to fall in the 1990s, and hit a 30-year low in 2001. Though there were many reasons for this dramatic price decline, global overproduction and export dumping were critical factors. And, in the view of West Africa's producers, the United States was the main culprit.

Washington's subsidies provide direct fixed payments, retroactive payments that kick in when world prices fall, and marketing loans to cotton producers concentrated primarily in the Mississippi delta, California and Texas. By the time world cotton prices collapsed in 2001, the United States was paying out over $2 billion, or approximately $250 per hectare of productive land. West Africa's farmers were simply unable to compete. 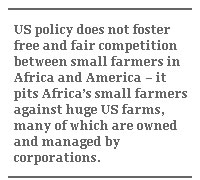 Undercut by falling world prices, West African cotton producers began demanding economic justice. Producers went on strike in 2000 and, over time, prevailed upon their governments to take action. In June 2003, with the governments of Benin, Chad, Mali and Burkina Faso in the lead, West Africa presented a proposal for phasing out cotton subsidies to the World Trade Organization; three months later, the issue was on the agenda at the Cancun Summit of trade ministers gathering to negotiate the Doha Round of global trade talks.

Cancun proved both a setback and a victory for West Africa's cotton farmers. Although US Trade Representative Robert Zoellick had initially signaled a willingness to negotiate meaningful agricultural reforms, the US ultimately joined the European Union in opposing the developing world's demands. However, because the developing world joined forces - through the “G20,” a coalition led by Brazil, India and South Africa - the US and EU were unable to force a compromise. The unresolved dispute over agricultural subsidies was one of the key factors leading to the collapse of the talks.

Hope finally came to Africa with the WTO panel's ruling last month. If the April ruling is translated into a shift in US agricultural and trade policies, the gains for West Africa's farmers, and indeed all of Africa, would be significant.

First and most immediate, the removal of US cotton subsidies would counter the global price distortions caused by overproduction and export dumping, thus allowing African cotton farmers to compete fairly and secure a higher price for their cotton.

Second, the April ruling represents a gain for Africa in its ongoing effort to challenge international terms of trade that are skewed disproportionately in favor of the world's richest countries. While the United States has been quick to remove barriers to industrial goods and services - sectors in which it has a distinct global advantage - it has maintained a strict protectionist stance when it comes to agriculture. In reference to the United States and the EU, Oxfam International's “Double Standards Index,” which measures average tariffs, the size of tariffs in agriculture and textiles, and restrictions on imports, finds that “both these agricultural superpowers are exporting at prices more than a third lower than the costs of production.” Research by the International Food Policy Research Institute finds that “protectionism and subsidies by industrialized nations cost developing countries about US $24 billion annually in lost agriculture and agricultural income,” while ‘trade-distorting measures also displace more than US$40 billion of net agricultural exports per year from developing countries.” A WTO ruling recognizing that these policies constitute a violation of international trade rules opens the door to a broader debate and, ultimately, negotiations about the global terms of trade.

Third, the April ruling makes clear that the world's developing countries can negotiate their interests in the WTO when they join forces, while also demonstrating that local initiative can be translated into global policy change. The initiative that led to the April ruling started neither in rich countries nor in African capitals - it started with West Africa's producers. 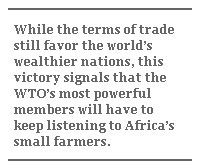 But even with the historic win represented by the WTO ruling, it is likely that West Africa's farmers will have few practical gains to celebrate in the short term. It is anticipated that Washington will appeal the ruling, and in particular take issue with Brazil's argument that US cotton subsidies constitute export subsidies because of the way they impact the global market and global trade. As well, it is unlikely that either Republicans or Democrats will come out in favor of the WTO ruling during an election year that finds the American farm belt central to both parties' political strategies.

Nevertheless, for the first time, African governments and African producers have seen the potential concrete benefits to them of constructive - and collective - participation in the WTO. While the terms of trade still favor the world's wealthier nations, this victory signals that the WTO's most powerful members will have to keep listening to Africa's small farmers.