Western democracies struggle to deal with a rising China amid new policies on trade, security and cultural outreach. Manfred Elfstrom reviews trends including concentration of political power with increased oversight and demands for absolute loyalty; reduced emphasis and delays on domestic reforms, including work conditions or the social safety net; and attempts to contain grassroots efforts to resolve concerns over environmental protection, development, discrimination, corruption and more. “Meanwhile, the party-state is making an ambitious bid at tech-enabled social control, including online censorship and extensive use of facial recognition software, which has taken its most extreme form to date in the country’s minority-dominated periphery, especially Xinjiang,” writes Elfstrom for Democracy. “The rudiments of a personalistic but sophisticated dictatorship and frightening panopticon are being put in place.” A social credit system tries to anticipate problems in advance, and Elfstrom points to two trends amid an aging population: rising unrest and decline of economic growth, both contributing to caution among China’s leaders that carries risks, as the essay's title suggests. Elfstrom urges foreign NGOs and individuals with China contacts to consider whether they provide cover for problematic policies or encourage reforms. – YaleGlobal

Read the article from Democracy: A Journal of Ideas  about economic and political trends in China. 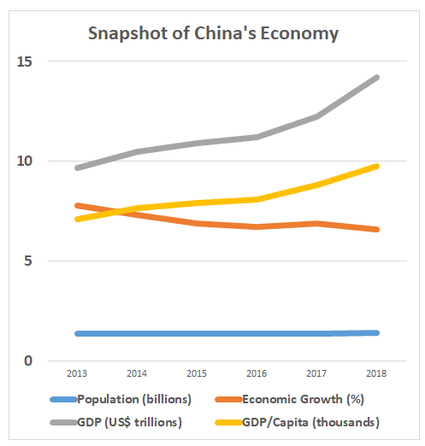 Rising China: The nation’s GDP and GDP per capita grow at steady pace despite slowing population and economic growth (FocusEconomics)

The Achilles Heel of Xi's Reforms

China and Xi – More Powerful by the Day

© Democracy: A Journal of Ideas, Inc. All right reserved.