Governments with heavy debt loads are hooked on stimulus and low interest rates. Japan, the world’s third largest national economy, has national debt worth more than 230 percent of its GDP. The Japan Times reports that government officials could add more debt by finalizing plans for a ¥13 trillion stimulus package. The government hopes to take advantage of negative interest rates from the country’s central bank. Negative rates require savers and lenders to pay borrowers for using their money. Japan, with a median age of 47, has an older population with many retirees who depend on savings accounts and pensions that offer less interest income. Negative rates heighten uncertainty for young and old as retail sales and factory output are in decline. “The government plans to promote information and communications technology in education by supplying more computers to public schools to ensure each student in the fifth to ninth grades has access to one, according to the sources,” reports the Japan Times. “The stimulus is also aimed at alleviating the negative impact of the Oct. 1 consumption tax hike to 10 percent from 8 percent, as economic figures have signaled some damage.” Stimulus funding is a preventive measure, but massive debt constrains options should a major recession strike. – YaleGlobal

Read the article from Japan Times about the government considering more stimulus spending to prevent recession.

Reuters and Kyodo news agencies contributed to this article, along with staff of the Japan Times. 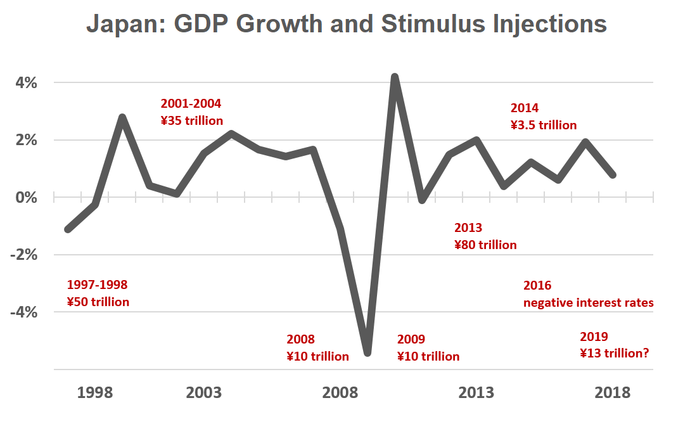 Struggle against stagnation: Japan has tried an array of stimulus policies and spending to invigorate economic growth and GDP since the 1990s; a selection of stimulus plans is shown and these include purchase of commercial debt, bond purchases,  public investment, writedown of loans and more (Source: World Bank and Investopedia)

The End of Inflation? The Economist

The US Deficit Economy: Project Syndicate