Immanuel Wallerstein, a long-time contributor to YaleGlobal Online, died August 31, 2019, at the age of 88. He was also a member of the faculty of the Sociology Department at Yale. A prolific writer of many books and essays, he also developed world-system theory, suggesting the world has been caught up for centuries in a system of dominant and dependent nations and communities. “Wallerstein obtained an unparalleled and truly encyclopedic knowledge of the social, political and economic history of the world over the past five hundred years,” notes an essay from the Sociology Department at Yale. His final article for YaleGlobal Online was “Encyclopedias: The Truths du Jour.” – YaleGlobal 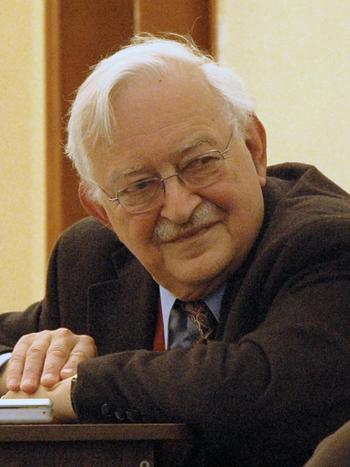 Immanuel Wallerstein, a prolific writer on multiple global challenges and long-time contributor to YaleGlobal Online, died August 31, 2019. Wallerstein was also a senior research scientist for the Department of Sociology at Yale from 2000 until his death. The recipient of numerous awards, he also served as president of the International Sociological Association from 1994 to 1998.

Wallerstein was an intellectual force for those who question globalization and global systems and institutions, perhaps best known for his world system theory and opposition to the exploitive nature of capitalism and the subsequent inequalities associated with colonial systems, developing economies, unskilled labor and more. For him, the world’s many competitive nations are caught up in a system of dependent and dominant states and individuals.

According to his theory, “This ‘world system’ promotes an international division of labor, and this has propitiated a distinction of three types of countries: central, peripheric and semi-peripheric,” explains Gabriel Andrade, assistant professor of ethics and behavioral science at Ajman University, UAE, for the journal Merion West after Wallerstein’s death. “Peripheric countries are those that have been colonized. Their function in the system is to provide raw materials and cheap labor. Central countries are colonial powers; they extract resources, process them, and sell their products at a much higher price. Semi-peripheric countries serve as commercial intermediaries between central and peripheric countries, and additionally, they serve as bases of operations for attacks from central countries against other central countries.”

Wallerstein’s writings explored all facets of the world, and he took nothing for granted. His last article for YaleGlobal tackled encyclopedias as a tool for a world experiencing rapid change: “Encyclopedias are in fact historical documents of the era in which they were compiled. We can learn much about the evolution of the world’s institutions and modes of thinking by using encyclopedias as an historical tool. Not only containers of different truths, they enable systematic comparison among diverse eras and language communities.” This essay, like so many others by Wallerstein, urged critical thinking and he cautioned scholars to approach such documents and the promises by their creators and organizers with skepticism.

He was the author of numerous books – including four-volume The Modern World-System, The Capitalist World-Economy and World Systems Analysis and Dynamics of Global Crisis and Uncertain Worlds: World-Systems Analysis in Changing Times – and Wallerstein encouraged fellow humans to consider alternatives for a better life and organize collectively for new and better systems. He published a wealth of essays, two each month since 1998, first for the Fernand Braudel Center at Binghamton University and then his own website. These covered quick fixes and intervention in the Middle East, the consequences  of US decline, the Israeli-Palestinian conflict, neoliberal globalization and more – some reprinted by YaleGlobal.

The last commentary, his 500th, was published on July 1. The essay mostly focused on his writing process, but also offered parting advice: “I have indicated in the past that I thought the crucial struggle was a class struggle, using class in a very broadly defined sense. What those who will be alive in the future can do is to struggle with themselves so this change may be a real one. I still think that and therefore I think there is a 50-50 chance that we’ll make it to transformatory change, but only 50-50.”

The Trans-Atlantic Aftershock of 9/11

Also read the essay about Wallerstein from the Sociology Department at Yale.

YaleGlobal
© 2019 YaleGlobal and the MacMillan Center