Expect global leaders to apply caution in interactions with the United States. Volodymyr Zelensky, president of Ukraine since May, spoke with US President Donald Trump by telephone in July, shortly after the president had suspended an aid payment. Details of the call, possibly connected to a whistleblower’s complaint about Trump, have galvanized global attention. Speaker of the House of Representatives Nancy Pelosi launched an impeachment inquiry; the next day the White House released a partial transcript during which Trump suggested that Zelensky investigate candidate Joe Biden and his son. The conversation highlights corruption in Ukraine, efforts to curtail Russian influence, and the need for countries to balance relations between the Europe and the United States. The two men met at the UN, and Bermét Talant, writing for the Kyiv Post, suggests that Trump was not interested in Ukraine’s challenges, instead suggesting the EU could do more. The EU is the country’s largest trade partner, providing €15 billion in grants and loans since 2014. Talant reported on Zelensky’s discomfort: “We thank all EU countries and the U.S. but we want more (support.) I understand that only together (with) America and the EU we can stop the war (in Donbas),” Zelensky said. “I heard that you made some progress with Russia,” Trump replied. “I hope you and Vladimir Putin can get together and solve your problems.” To the media, Zelensky said, “I don’t want to be involved to (sic) the democratic open elections of USA,” and he added, “Nobody pushed me.” – YaleGlobal

Released transcript of call between the US and Ukrainian presidents does not ease impeachment concerns for Trump and puts Zelensky in tough spot
Bermét Talant
Thursday, September 26, 2019 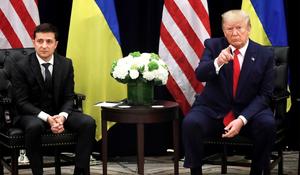 Read the article from the Kyiv Post about a telephone conversation and meeting between the US and Ukrainian presidents.

Bermét Talant is a staff writer at the Kyiv Post covering politics, social issues, and corruption. She joined the newspaper in September 2016. She completed a three-month investigative reporting fellowship with the Organized Crime and Corruption Reporting Project (OCCRP) in Bosnia and Herzegovina in 2017 and contributed to several investigative projects.

All materials, including photographs, contained on this site are protected by copyright law and may not be reproduced without the prior written permission of Businessgroup LLC