From Famine to Fries The Potato has Come a Long Way 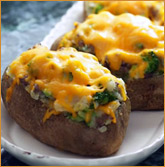 Once grown only in parts of South America the potato has become the most common food around the world. Its journey is one of globalization’s many stories.

The potato was domesticated and a diet staple in the Andes region some 10,000 years ago - long before the arrival of the Spanish on the continent and their own “discovery” of the tuber. In the 1500s, Spanish conquistadors brought the tuber to Europe, and from there it traveled to India and on to China.

Once thought to be poisonous and the cause of leprosy, the potato eventually won over Europeans. Better suited to the damp climate of northern Europe than wheat, yet not as dependent on irrigation as rice, the potato was a reliable crop. In fact, Frederick the Great required his subjects to plant the resilient tuber as a safeguard against starvation.

War added to the reliance on potatoes. Invaders intent on destroying an enemy’s crops often missed underground tubers. This is offered as one theory behind the potato’s prevalence in Ireland, which was plagued by war throughout the 17th century. Had the Athenians discovered the potato, they might have withstood the Spartan invasion longer during the Peloponnesian War. However, armies soon expanded their targets:  The War of Bavarian Succession (1778-1779) was nicknamed the “Potato War” as the Austrians and Prussians took to destroying each other’s crops, mainly potatoes.

The potato, as ready and resilient food staple, allowed populations to increase and move from subsistence economy. However, over-reliance on the potato brought its own peril as seen in the Irish Potato Famine of the 1840’s. Before the onset of the famine, Irish peasants were eating an average of 10 potatoes a day as well as feeding potatoes to their livestock. A fungus from North America wiped out the Irish potato crop, which consisted of two high-yield varieties. The Irish population, which had grown by 5 million in less than a century, thanks to the hardy potato, fell by 2 million in less than a decade. As one scholar noted, “The Irishmen who had lived by the potato died by the potato.”

Despite the famine in Ireland, the tuber’s stock continued to rise globally and forms a staple part in many people’s diets. China is now the largest producer of potatoes with a production of more than 75 million tons yearly. India is the third largest producer with an annual output of more than 25 million tons. As production increased in developing countries so has consumption. Asia now has a yearly consumption of 14 kilograms per person while Latin America consumes 24 kilograms per person. World potato production lies at 324 million tons.

From its humble beginnings, the potato’s  has transformed from a odd tuber, suspected of transmitting disease, to a global staple and a main ingredient in dishes ranging from causa rellena and gratin dauphinoise to aloo tikki.