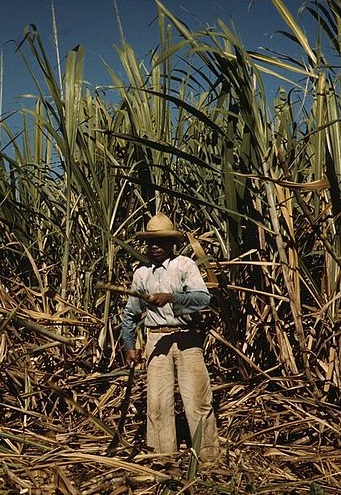 Sugar is a substance consumed for cultural reasons as well as its sweet taste. The crystals refined from sugarcane, beets, maple syrup or sorghum supply caloric energy, but no vitamins, minerals or other nutritional value. Although many nutritionists today deem sugar as a source of “empty calories,” the commodity has integrated the world.

Humans first began growing sugarcane in Oceania around 8000 BCE. From there, people gradually exchanged sugar through India, Persia and Byzantium. The roots of the English word “sugar” reflect its storied past, tracing first to the Sanskrit shak-ker. Around 500 BCE, Indians were boiling cane sap to make crystals for medicine, the primary early use of sugar. From there, sugar reached the Muslim world and became the Arabic sukker, a lavish substance that had become inextricably linked with power. In 1412, a caliph commissioned an entire mosque to be carved out of marzipan, so adherents could worship inside – and then devour – walls of ground almonds and sugar.

Europeans began craving sugar soon after the Crusades and invasion of Islamic lands in the 11th century. Sugar was a luxury good, with an exorbitant price in line with spices. Efforts to make supply meet demand was a struggle: Sugarcane is a tropical perennial grass that cannot withstand the temperate climate of Europe. Hence, in the 17th and 18th centuries the Portuguese, Spanish, Dutch, English, and French all dispatched ships with people and supplies to South America and the Caribbean to establish sugar plantations. Sugar islands like Jamaica and Martinique were among the most profitable colonies held by English and French empires, respectively.

The trans-Atlantic journeys and distant plantations captivated the imagination of au courant writers, and sugar emerged as a motif in the earliest English novels. In Gulliver’s Travels, Jonathan Swift proffered his thoughts on British political economy when he wrote that useful colonies only “abound either in Gold, Silver, Sugar or Tobacco.” Kindred traveler Robinson Crusoe resolved to settle in South America after seeing “that means with the manner of planting and making of sugar; and seeing how well the planters lived, and how they got rich suddenly.”

But sugarcane is a labor-intensive crop, and most of the people working the fields were slaves. Dissatisfied with the work of indigenous people, European plantation owners turned to West Africa to import slaves just a few years after colonizing the islands. Today, in former sugar colonies such as Haiti, over 90 percent of the population have African heritage. In addition to the demographic transformation, providing sustenance for the multitude of slaves “entangled yet another region” in the web of sugar, writes historian Richard P. Tucker. Planters imported wheat from New Orleans and Mexico, as well as cod from New England, to produce profitable sugar in the islands.

Because sugar is rarely consumed by itself, its history is closely tied with other foods and beverages. With the Age of Exploration, Europe became enamored with exotic hot beverages such as tea from China, chocolate from Mesoamerica and coffee from the Middle East and Africa. In economic terms, sugar and such beverages were “complements” – and as prices for the sweetener declined, demand surged. Accordingly, a single sweetened drink could represent European imperialism over multiple continents.

Although the United States was initially a colony and not a colonizer during the age of vast European empires, its rising power through the 19th and 20th centuries led to a new type of hegemony. In what historians dub “ecological imperialism,” America expanded its zones of production, political control and ecological destruction into islands both near and far.

Speculation during the decade known as the Roaring ‘20s and subsequent financial devastation were not confined to the United States. By 1918, Wall Street was making ill-advised deals worth millions of dollars to Cuban planters, in a bubble known as the “Dance of the Millions.” To repay the loans, planters cleared more forest. Most defaulted, placing about 60 percent of the sugar that Cuba produced into US hands, strengthening the political grip over the island neighbor. Even “all-American” companies like Hershey’s Chocolate owned land and mills in Cuba by the early 1900s. After the revolution and US embargo in 1960, Cuba struggled economically with a $150 million food import deficit. In a cycle of economic and political dependency, the Cubans sold sugar again, but to a new buyer – the Soviets.

Americans were also acting as ecological imperialists in the Hawaiian Islands. Centralized economic power led to centralized political power, and domineering companies were behind deposing the monarch in 1893, establishing their own Republic, and convincing the United States to annex the islands. By 1933, just five American and European sugar companies controlled 96 percent of Hawaiian sugar. Similar to the 17th century Caribbean, the big planters also imported large numbers of laborers from overseas. First the Chinese in the 1850s, then the Japanese, and finally Filipinos migrated en masse, and all contribute to Hawaii’s multiethnic composition today. 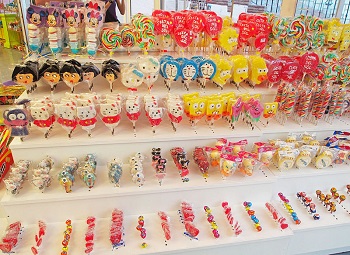 While sugar may have helped create diverse populations across the world, it has contributed to homogenizing our food. Sugar is ubiquitous, an unnoticed ingredient in products like pasta sauces and bread while not-so-hidden in children’s breakfast cereal. In 1822, the average American consumed about 7 pounds of sugar per year and today that is 75 pounds, reports the US Department of Agriculture. While consuming sugar has not been proven to cause diabetes per se, many studies have found a strong correlation between the two along with obesity. Indeed, over 7 percent of the US population has diabetes and 35 percent are considered obese.

Diabetes does not discriminate by nationality, with about 300 million affected worldwide, the vast majority of whom live in the developing world. A 2013 study published in the journal Public Health Nutrition posits that a country’s level of food imports has the strongest correlation, more than GDP, with the dramatic spike in diabetes rates in developing countries. The liberalization of trade markets has introduced many sugary foods and beverages that are low cost but nutritionally worthless. Taxes to reduce consumption followed. This phenomenon is evident in Nauru. About 40 percent of this tiny Pacific island nation has diabetes, the vast majority of their food is imported and processed, and a soda tax was imposed in 2007.

Sugar has traveled far beyond the tropical Pacific lands where humans first began cultivating cane. Although Europeans experimented with other sweeteners such as maple syrup in 1680 with assistance from Native Americans, and then sugar beets in the Napoleonic Wars, when Britain blocked cane imports into France, sugarcane ultimately has emerged as the dominant source for satisfying the world’s enormous sweet tooth. People of earlier millennia would not recognize their precious commodity as the progenitor to today’s omnipresent super-size sodas and ice cream. To be sure, the globalization of sugar has not been all sweet.

Rachel Wu is a fellow at the Whitney and Betty MacMillan Center for International and Area Studies. She is a sophomore at Yale University.