A World Connected: Globalization in the 21st Century 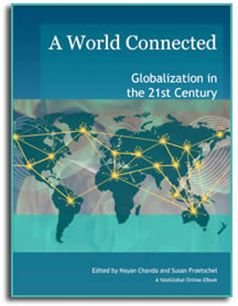 No word has evoked as much passion in recent times as the word “globalization,” which carries an array of meanings among different people and disciplines. But the fact is that globalization is a historical process that has connected the world and influenced it, for better or worse, in every aspect of life.

A World Connected: Globalization in the 21st Century

is a collection of more than 100 thought-provoking essays by renowned scholars, journalists and leading policymakers published over the past decade by YaleGlobal Online, now published by the MacMillan Center. The essays are grouped by chapters on Global Economy and Trade, Security, Diplomacy, Society, Culture, Health and Environment, Demography and Immigration, Anti-Globalization, Innovation and Global Governance and offer insights about globalization trends for the future. The volume contains an introduction by the editors and a preface by Yale University President Richard C. Levin.

“With intelligent and timely analysis, YaleGlobal and its first e-book, A World Connected: Globalization in the 21st Century, perform the valuable task of raising awareness about our interconnected world and highlighting the need for international cooperation and better governance.”
– Richard C. Levin, President, Yale University

“As the story of globalization continues to unfold, reflecting on the lessons and challenges of both the recent and more distant past is critical to understand the options as we move forward – together, as nations, societies, communities and individuals – and the potential impact of our collective choices. This book will serve as an invaluable and thoughtful reference along the journey.”
– Tracey Keys, GlobalTrends.com